Arís statement to BIPOC artists and our theater community.

Being the Change We Want to See:
An Invitation to Join Our Board
Find out more...

Arís presents a staged reading of Allegiance by Mary Kenny 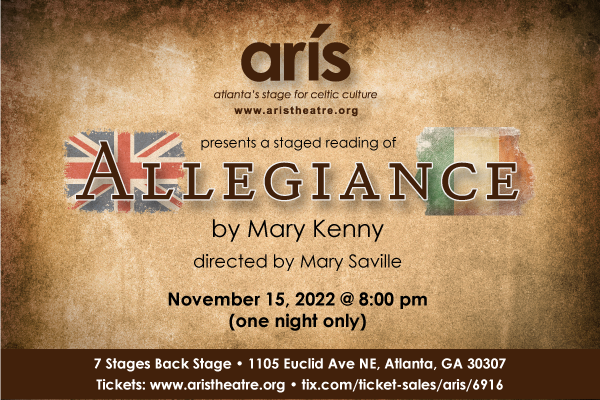 ALLEGIANCE by Mary Kenny is an imaginative reconstruction of a meeting between Winston Churchill, and Michael Collins in the Autumn of 1921 at a crucial time in Anglo-Irish negotiations which had come to an uncomfortable impasse. Collins meets Churchill to continue negotiating the Anglo-Irish Treaty and try to find a way forward. The two men drink, talk, argue, and wrestle with one of the most difficult moments in Irish history.

Our presentation is part of the centenary observation of the signing of the Anglo-Irish Treaty, which formed the Irish Free State on December 6, 1922.

Click here for tickets – on sale now!
Arís, Inc. is a 501(c)3 non-profit organization, donations are tax-deductible to the extent permitted by law. Donations may be made either via Paypal or by check payable to Arís, Inc. and mailed to:

Our mission is to bring the theatrical and literary traditions, mythology, and storytelling from and about Ireland, Scotland, Wales, and England to Atlanta. Aris presents full productions and staged readings of contemporary and classical plays. We celebrate annual events such as Burns Night and Bloomsday. We participate in other events that feature the literature, poetry, and music of the British Isles. Aris is committed to breathing fresh life into timeless classics as well as introducing our audience to the work of new and emerging contemporary playwrights. 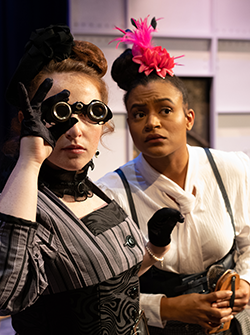 Maggie Beker (Gwendelen) and Tamia Fair (Cecily) in "The Importance of Being Earnest", 2022. Photo by Jessica Fern Hunt.